Attorneys in smaller towns are often the first to know the business future of local store-front operations. Writing up incorporation papers for these businesses gave the Grimstad and Brown Law Firm inroads into new companies long before other people had heard the news.

In 1915, one of Brown’s first ventures was as the president of a car dealership he had just incorporated called Midland Motor Company.

Billings was a hot market for the sale of new cars, which were just becoming available to the general public. In fact, demand was so high that automobiles were hard to come by. But within one month of incorporating, Rockwood had secured a distributorship for the Briscoe and Hupmobile. While those would hardly be the sleekest of car names today, at the time, vehicles were a distinctive commodity to be sold, whatever the brand. Brown also smartly secured partial interests in some related businesses: Crescent Tire and Rubber Co., Gas Co-Ops, and Northwestern Auto Supply Co.

Over the next several years, 1915 through 1918, Grimstad and Brown did increasingly well in servicing this growing town. Both men saw even greater rewards (and probably more excitement) in their independent financial ventures.

But world events were slowly intruding into everyday life. Gradually, people were forced to shift their gaze and refocus their attention on other things. 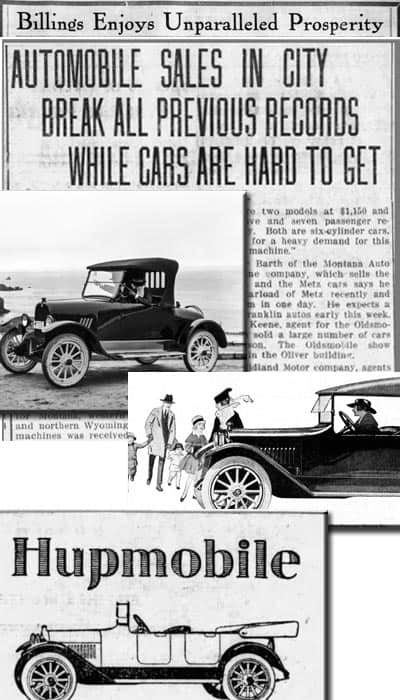 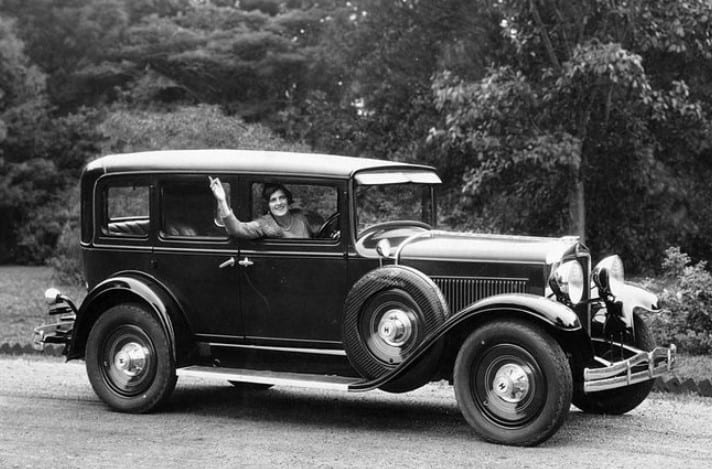 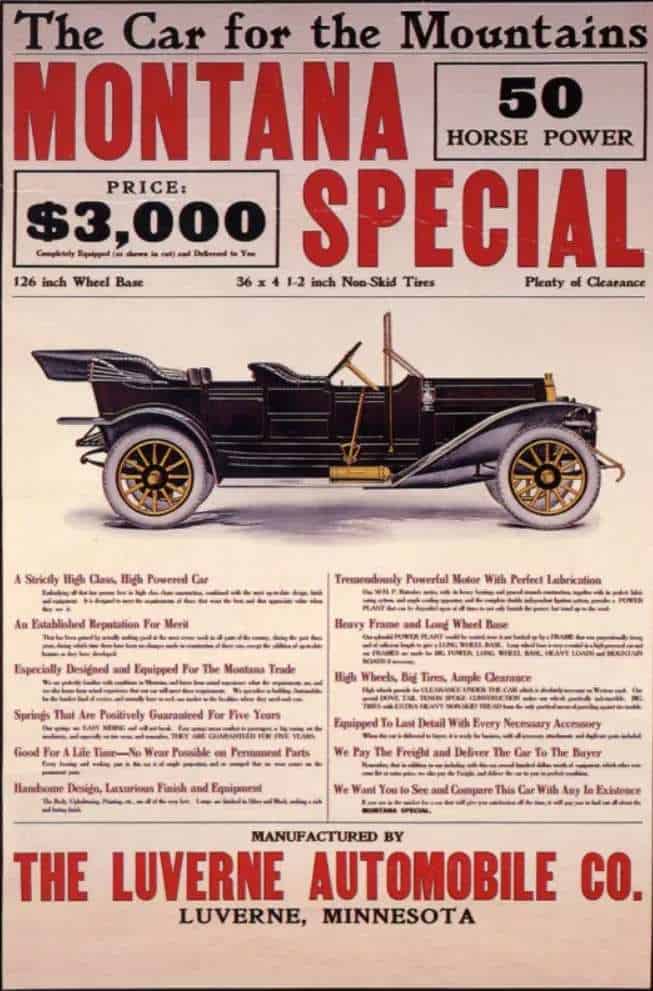 NOTE:  The surging influx of people caused businesses to flourish. Billings called itself the “Hub of the Midland Empire” and boasted florists, music teachers, photographic suppliers, confectionaries, and even an osteopath. Products like stoves, windows, crackers, bricks, noodles, and beer all came from this growing city. High employment brought workers to sawmills, flour mills, foundries, and sugarbeet factories. And even home businesses thrived as the need for cooking, clothes-washing, and sewing was called for.  (Montana Historical Society) 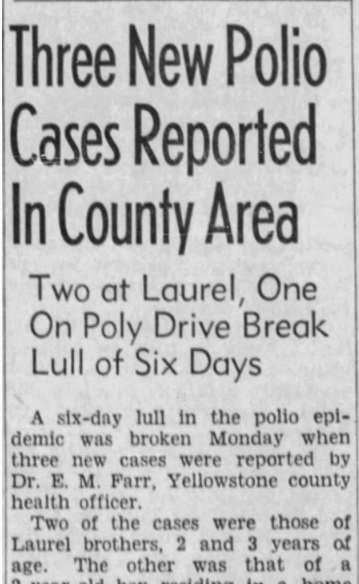 A year after the birth of their first child Barbara, both Rockwood and his wife Elizabeth watched closely as headlines about Infantile Paralysis greatly alarmed the national community. The city of Billings thought it would be immune. It wasn’t.

Doctors had found no cure for this devastating and easily transmitted illness. Rural communities were not unaffected. The Browns, along with all parents, took steps to shield their children from its lethality. But even the reason why it spread to children under 18 years of age was still a mystery. For decades into the future, Polio, as it was commonly called, would be a summertime fear.

NOTE:  Outbreaks of Polio were causing national hygiene issues to change as people reached for solutions. “In 1900 toothbrushes were still rare in the United States, deodorants and shampoos almost unheard of. Few people bathed more than once a week or rinsed their hair more than once a month. Fewer still washed their hands before eating or after using a toilet. Spitting was almost universal. Travelers shared beds and chamber pots with complete strangers. Most houses, lacking screens, attracted swarms of insects in warm weather. Water supplies were unfiltered, and food was poorly refrigerated, if at all.” From the book Polio: An American Story by David M. Oshinsky

Within a few months of President Woodrow Wilson’s re-election under the slogan “He kept us out of war,” the conflict in Europe worsened. American intelligence had intercepted a communication from the German government encouraging Mexico to start a war with the U.S. to recover territory lost. This discovery caused anger among American citizens and ultimately tipped the scales.

On February 5, 1917, the U.S. entered the fight. A Selective Service Act was signed four months later, and all men up to the age of 30, including Brown and Grimstad, were required to sign up. Although eligible by age, neither man was drafted because each was a young father.

Posters and songs helped to change the attitudes of those who were still anti-war. Almost 40,000 Montanans volunteered or were drafted for the war.

Grimstad and Brown, while strongly supporting the war effort, refused to be sidetracked. A massive influx of people into the area was still proceeding and the duo wanted to continue to grow their investments.

NOTE:  Both Grimstad and Brown supported the war effort financially and even gave help to the Red Cross efforts to raise money to support wounded American soldiers. 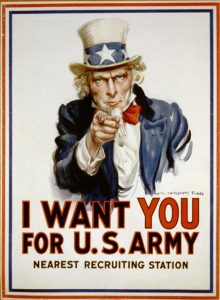 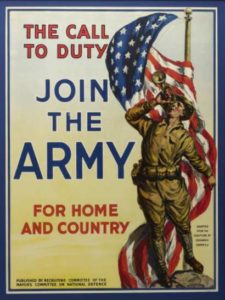 But Life Must Continue

Together with the support from their bank and two other buyers, they purchased nearly 8000 acres, nineteen miles east of Billings or halfway to the grassland region of Toluca.

It was the largest land purchase Montana had ever seen. But almost immediately, Grimstad and Brown resold the land and bought another 12,000 adjacent acres! This second acquisition of tillable cropland, also near Toluca, produced $40,000 of profit in its first year. That amount is equivalent to $561,000 in 2020 dollars. Their immediate reaction was jubilant confidence in their investment shrewdness.

No one knew it at the time, but this property would be used for other reasons in the future. 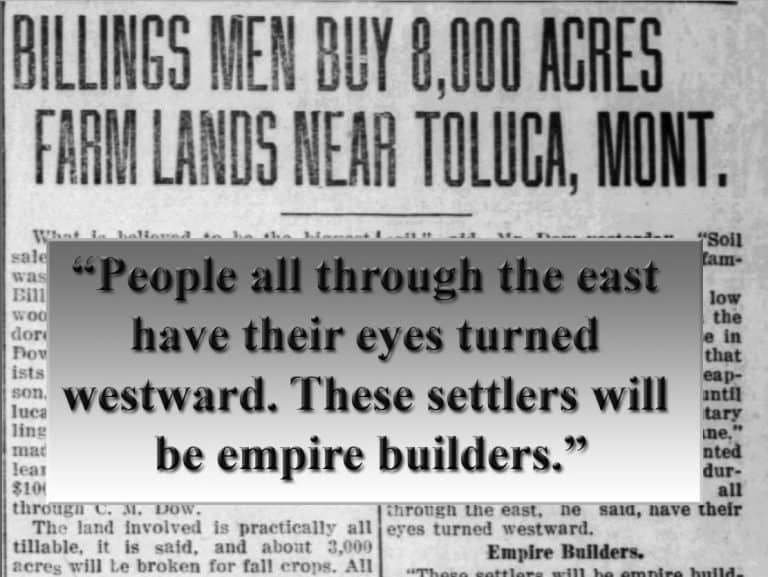 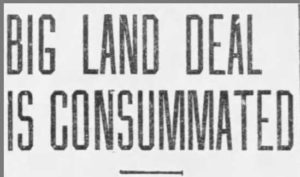 Through months of international conflict, there remained a willingness among young men to enlist in military service. As a result, Montana contributed the highest numbers of soldiers per capita of any state: 10% of its population. Still, there was vocal opposition to the war, and even one Montana Congressional Representative (Jeannette Rankin, the first woman elected to the U.S. Congress) voted against a war resolution. But more than a year after the U.S. entered it, the “Quick War” that everyone expected was still grinding on.

Even feeling that they should more strongly connect with the national effort, both men wanted to keep their law office open and nurture its progress. Yet, the unfinished worldwide dispute kept gnawing at their daily routines. Grim decided that he had to join the Navy. So he abruptly interrupted his professional career, hoping to meet his two brothers in active service in France. Rockwood stayed, anchoring the office.