The year was 1887. Rockwood Smith Brown was born in a rural New England town as the second son of prominent lawyer-father Alfred Keith and his librarian-mother, Nellie. Rockwood’s first name was derived from a notable Massachusetts senator that his father knew. For several years, the family lived in a large house on Main Street and enjoyed the company of other relatives nearby. Sometimes the clan would escape to their summer cottage about an hour’s train ride north at Lake Brome in Canada.

As the years went by, the popular Brown family benefitted from an ever-widening group of social friends.

But one Saturday night in 1896, their ideal family life came to a sharp halt. Rockwood’s father was suddenly stricken with a heart attack.

The family was no doubt in shock. So was their small community in Vermont. “No death that has occurred in Richford in recent years has caused more sorrow,” printed The Richford Journal and Gazette.

Nellie sold their stylish house and moved her grieving family into an upstairs apartment of a small duplex. The $2000 received as his life insurance and a librarian’s salary could never sustain their previous lifestyle.

As they grew up, the boys, including the youngest arrival Robert, learned early to assume a supporting role as breadwinners for the fatherless household.

At age 15, Rockwood gained an appointment as a Page in the state legislature at Montpelier, Vermont. Then a weekly tourist newspaper in Bethlehem, New Hampshire, hired him to work during his summers. Wrapping up his early education, he spoke during high school graduation for his six-member class.

All the boys performed well academically and over time, Nellie Brown would help each one attend college. Two of them would become lawyers, another a successful businessman, and the fourth, a doctor. 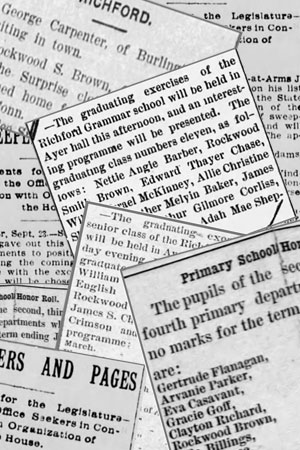 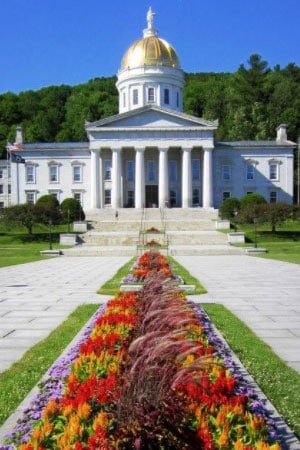 Young Rockwood had always revered his father and had intended to follow him into the profession of law. So he first visited and then accepted an invitation to attend the University of Vermont. In 1906, he was one of 110 new students at the University’s Burlington campus. Choosing a liberal-arts curriculum at the college prepared him well for law school to follow.

NOTE: Some “modern conveniences” gradually made life easier. Local telephone service and indoor plumbing did not exist by the time Rockwood left for college. But radios, razors, vacuums, corn flakes, and motion pictures, all were invented during the first decade of the 1900s. Automobiles, electricity and light bulbs became gradually available in Richford starting in 1904. Rockwood probably first saw electric street lighting when he went off to college in 1906. But gas-lighting was still in wide use. As seen by the sign below, people had to be alerted to these new-fangled devices.

Each summer during his college years, Rockwood anticipated the active days he would spend as a steward on the steamer Vermont, a sister ship of the more famous Ticonderoga. Those “Lake Champlain Summers” were spent ferrying tourists between Vermont and New York. He loved his job and returned to it for several years.

But it was time to graduate from the University of Vermont and move on to law school. The University of Michigan had been his father’s choice, and it was also where Rockwood wanted to attend. The law school was highly regarded and his high grades propelled Rockwood’s acceptance.

On To Ann Arbor

Rockwood did not participate in many extra-curricular activities at Michigan Law School, but he did try acting in a play. He also became close friends with another student by the name of Olaf King Grimstad, or “Grim.” Although members of the Class of 1911, their accelerated schedule allowed both to graduate in the summer of 1910. After working only a few months as law interns, they decided to head for the West Coast to see what they could accomplish as partners in their own firm.

NOTE: Students were not immune to promotional materials that touted benefits of moving into the “rugged” west.  Trade shows and articles promoted opportunities that were newly available because of rail lines which had recently been built across Montana.

For many decades, newspapers would be the “Facebook” of today. There was no widely available telephone service when Rockwood was in college, so society pages would recount the most mundane of activities within families. A specific record of the comings-and-goings of people was there for all to read. Home addresses and (party line) telephone numbers were openly displayed. Family travel, functions, and day-to-day meetings were closely followed. The constant sharing of life-detail was public, so this openness naturally led to close-knit communities.

National and world news also influenced daily life. As we are influenced by major changes today, people at that time also made decisions governed by historical events.