Life had some unrelated ups and downs between business and government events, as it does for everyone. Rockwood fractured his knee in a serious automobile collision. He helped start two societies in Billings: History and Paleontology. The Brown’s car was stolen and later recovered. And while he was running his many entrepreneurial ventures and law firm, he was still promoting his city as the first president of the Hilands Golf Club, the Kiwanis Club and Commercial Club.

Dating back to their early days in Billings, Rockwood and his wife Elizabeth were active members at St. Luke’s Episcopal Church. And they watched their family grow. Barbara left for college in Colorado. Keith and his friends goaded an old jalopy toward the Chicago World’s Fair. Neal marched off to a military academy in Minnesota. Young Rockwood became interested in model airplane competitions.

NOTE: Billings’ population grew to about 16,000 people in 1930. This was the decade that saw Mickey Mouse, Al Capone, Jesse Owens, Amelia Earhart, and Superman. At the same time, locally, the Billings Municipal Airport, Yale Refinery, Cobb Field, and the Pictograph Cave garnered headlines. Rockwood Brown is thought to have left his own imprimatur while hiking above the Rimrocks in 1932. His inscription was discovered on a large rock, a few hundred feet east of rural property currently owned by Debbie and Scott Brown (his grandson). Rockwood would have been remotely exploring at age 45.

Son Rocky recalls that he could identify good and bad times by the number of new items they purchased. Things must have gotten better when they purchased “new furniture, a new electric refrigerator, a green-colored mangle ironing machine, a green gas stove, and Mom got a Hammond electric organ because we had a broken-down player piano…whose keys stuck.”

There were the little known anecdotes of the Brown’s influence on the city too. Mr. and Mrs. Brown grew hundreds of seedling trees in their back yard which were freely offered to line Billings streets with greenery. During the depression years, the alley behind their main house became a dispensary where food was quietly parcelled to the unemployed. And, bringing strings of Christmas lights from an East Coast trip, the Browns became the first family to light up their porch with a magical color of the season.

Then, there was that Packard automobile.

Regardless of the angry political thicket that had recently consumed him in Helena, Brown’s active promotion of the Treasure State had not gone unnoticed. It had been only two months since he was “politically removed” from the Highway Commission.

If he had been convicted of actual wrongdoing, or if the accusations even tainted him, Brown would never have been considered for another government appointment. But he was. This was a public admission that his previous removal was purely political.

The new governor needed a no-nonsense business leader to spearhead the state Water Conservation Commission. Brown would soon be elected its chairman.

Back to the frenzy of work he went. And he was ready.

By 1937, Montana felt the consequences of a second, severe and ongoing drought (the first occurring in the 1920s) which had especially choked its eastern farmers.  These were conditions that Rockwood Brown had first noticed in his tenure at the Highway Commission. So once again, as he was on the move around the state’s cities and small towns, he scheduled countless speaking engagements to inform the public of risks in ignoring water conservation. They listened closely.

NOTE:  “We are definitely in the dust bowl, no rain for eleven months, day after day of dust storms, grasshoppers hatching by the millions, crops all gone and no feed for livestock. They ate down to the roots. They ate my husbands tools, the handle of the fork and spade and everything. They were chewed up. I could never hang out any clothes. They would eat up the clothes. I never saw so many grasshoppers in my life as were there.”

Brown also listened. Farmers were bitterly complaining, livestock and crops were suffering, and the water in rivers was flowing out of the state in huge amounts. Many of the state’s natural waterways would be spoiled if they were not stabilized for future use…and soon. The need for water conservation was understood and accepted among residents and farmers alike. 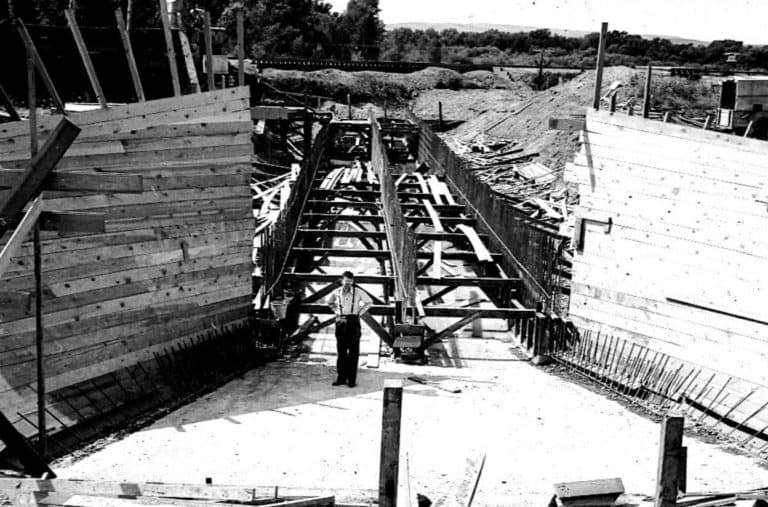 This water conservation commission had only been formed a few years earlier, but now it was granted a large influx of money from the federal government to resolve these issues. Many of the state’s waterways had previously been used for private interests, and those interests were damaging the natural balance of resources within the state.

To elevate conservation into the daily lexicon of the public, Brown first instituted a “Montana State Water Conservation Day Celebration” in the eastern town of Miles City, complete with marching bands, bathing beauties, and street dancing. The result was widespread recognition of the need for protecting one of the state’s most significant resources.

The Yellowstone River snaked 500 miles through Montana, the longest un-dammed river in the lower 48 states. “We have the greatest irrigation ditch in the world,” Brown famously said. “We had better use it wisely.”

Over 150 projects from irrigation, to dams, to reservoirs, to water control and re-routing were instituted to tame Montana’s pristine waters. Many of the new projects were long-term and needed the “whole-hearted cooperation of all state people.”

From a practical standpoint, it meant a doubling of irrigated land in eastern Montana. But from a public perspective, it meant the preservation of Montana’s resources for future generations.

Brown’s tenure on the board lasted from April of 1937 to January of 1941, and he succeeded in making water conservation a dominant and continuing issue for Montana. Doing so channeled a positive direction for the state’s conservation efforts, and preserved the beauty and the bounty of Montana for years to come.

NOTE:  Farmers were given more clout because their important service was finally being recognized. No longer did they have to use gasoline-powered generators for electricity. In 1935, the Rural Electrification Administration (REA) extended overhead power which brought them radios, network comedy, drama programs, farm reports, movie houses, and home electrification.